How to become Officer (Deck officer or Marine Engineer) on Merchant Navy ships? 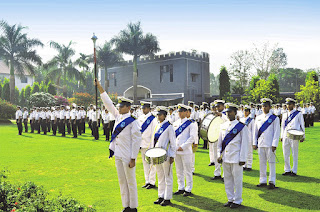 Merchant navy is a very lucrative career and becoming a Merchant Navy officer is a dream of many youngsters in India. Merchant Navy officers are not just decorated officers but are also are very highly paid.
In our other article we have already told you about Merchant Navy Departments, Ranks and Salaries. Please go through the below link in case you have missed it.

There are three categories of officers in Merchant Navy

You can choose any department of your choice as per your educational qualifications & interests.

If you want to become Deck officer then you have to join Deck department in Merchant Navy. The entry rank for Deck officers is Deck cadet. Then after experience and promotions you will become Third Officer, Second Officer, Chief Officer and finally you will become Captain of the ship. Captain is the highest rank achieved by Deck Officers.
To Join as Deck Cadet you have to do any of the following courses :

After completion of any of the above courses you will be posted as Deck Cadet on Merchant Navy ships.

After completion of any of the above courses you will be posted as Junior Engineer on Merchant Navy ships.

Electro Technical officer comes under Engine Department of ship. But to become ETO you have to do different course and educational qualification is also different.
ETO is a senior officer on ship and his salary is also very good. But there are NO promotions in this rank. Throughout your career you will serve in the rank of ETO only.
To become Electro Technical officer on ship you have to do following course:

After completing this course you will be posted as Trainee ETO and then will be promoted to ETO rank after some experience.

Also Read: How to join as ETO in Merchant Navy ships.