How to become Captain of a Merchant Navy ship? 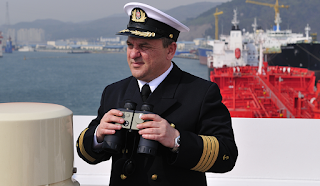 Captain is the TOP most officer in Merchant Navy. Ship sails under his command and he is considered as the Boss of the ship. Captain is a decorated officer and very highly paid. He commands a huge respect in shipping Industry. It is a dream job for many youngsters in India.
To become a Captain one should have a level of competence and certain experience. Therefore nobody can become Captain directly.
If you wish to become Captain of Merchant Navy ship then you have to join Deck department as Deck cadet and then after experience & passing some competency exams one can be promoted to the next ranks . Deck cadet is the junior most officer in Deck Department and Captain the highest rank.

After Deck Cadet you will be promoted as per following chart:

For every promotion you have to get some experience and pass a competency exam. It takes approximately 10 years time to become Captain of a ship.
Captain is the highest rank a deck officer can achieve. There are no more promotions after Captain Rank. If you wish you can continue as a captain till your retirement or you can very easily switch over to any office related jobs which are easily available for Captains.
You can whatsapp Marine Republic at 9875305872 for any Merchant Navy related queries & guidance.